Hazzard out of Celta vigo clash
Barcelona Griezmann: Barcelona didn’t knock on the door and that has to improve
The voice of battlers Spurs Vs Bayern Munich
Raheem Sterling has revealed Jadon Sancho was “begging” the Manchester City forward to assist him for his first international goal the night before England’s win over Kosovo. 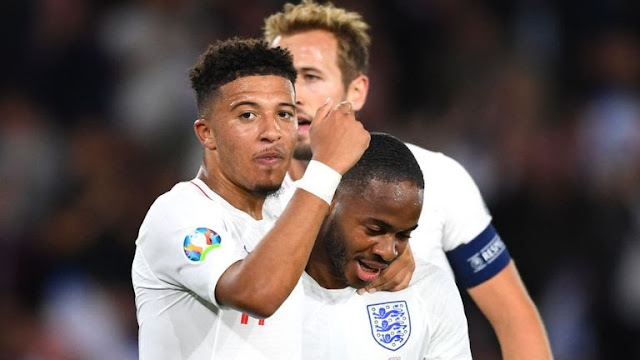 England’s 5-3 victory against Kosovo on Tuesday evening sparked many concerns for manager Gareth Southgate defensively, but one thing that was evident was the electricity of the front three of Sterling, Sancho and Harry Kane.

Five-star England repel Kosovo in epic
England’s all-star attack
England player ratings: The Sterling show
Sancho scored his first two senior international goals for the Three Lions, both assisted by Sterling, and the Manchester City star admitted the 19-year-old had been in his room the previous night asking for help to score.

Highlights of England’s European Qualifying Group A match against Kosovo
Sterling said: “He was in my room at 10.30pm last night begging for me to square one to him.

“So, I was really happy to see him score his first one. He’s a good kid.

“Even when I was at that age, I wasn’t doing some of the things he’s doing. He’s really professional.”

Sancho has been in fine form for Borussia Dortmund this season, scoring twice and assisting three goals in three Bundesliga matches, and he replaced Manchester United’s Marcus Rashford from the 4-0 win against Bulgaria on Saturday.

Gareth Southgate praised the ‘outstanding’ attacking play of Sterling, Sancho and Harry Kane
Southgate applauded his front three for their performance at St Mary’s, branding Sterling’s display “unstoppable” as he scored one and created three goals.

Southgate said: “Our attacking play, Raheem (Sterling), Jadon (Sancho) and Harry (Kane) were outstanding. I mean Raheem’s two performances have been of the highest level.

“I think he’s been almost unstoppable, his awareness of where defenders were, his ability to ride challenges, his vision and desire to get in on goal, and unselfish play as well, so I couldn’t speak highly enough of the way he played.

“Jadon – you know we were talking about the three on Saturday – Jadon’s performance was at that level as well.”