Nwakali speaks to soccerhub on rumors about dumping super eagles

Ifeanyi Ubah disagree with LMC as they award 3points to MFM

Iheanacho nominated, Mahrez out of premier league POTM for April

Ansu Fati… if you’ve never heard of Barcelona’s new superstar, you can be forgiven: until a couple of weeks ago, neither had the vast majority of the Spanish club’s fans.

But the 16-year-old has been thrust into the limelight after making history on Saturday, becoming the youngest player in La Liga history to register a goal and an assist in the same game.

Even more impressively, he needed only seven minutes to do so in his team’s 5-2 demolition of Valencia. Just 110 seconds had elapsed when he opened the scoring by meeting Frenkie de Jong’s low cross with a confident right-footed strike from 12 yards; five minutes later, he returned the favour by weaving his way into the box and picking out a precise pass for De Jong to convert.

Fati then continued to thrill the 80,000-plus Nou Camp crowd with a series of skilful thrusts down the left wing, coming close to more goals on several occasions and making it plain that this prodigious teen is poised for greatness.

So, who is he and where did his sudden explosion on to the scene come from?

Sadiq Umar despirate to push Almeria back to Laliga

Following the family footsteps
Fati was born on 30 October 2002 in Guinea-Bissau, and spent the first six years of his life in the African country before moving to Herrera, a tiny town in southern Spain, after his father Bori – a former semi-professional footballer in Guinea-Bissau – found work as a driver for the town’s mayor.

At first, Ansu was outshone by his elder brother Braima, who was signed by Sevilla’s academy. But Ansu joined him before long, and by 2010 his dribbling and shooting talents had attracted serious interest from Spain’s big guns. 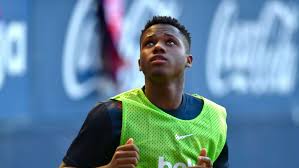 According to Bori in a recent radio interview on RAC1, the best financial offer came from Real Madrid – but Barcelona made more effort, with then-academy director Albert Puig (now at New York City FC) making a personal visit to the family home to state the Catalan club’s case. Barca also offered residency within their famed La Masia youth complex, so the Fati family headed to Barcelona.

Braima and Ansu – who were later joined at La Masia by younger brother Miguel – continued to impress, although they were temporarily sidelined in 2014 following Barca’s transfer ban for breaking Fifa regulations on signing young players from overseas. (The Fati brothers had moved from within Spain so they were not directly implicated, but the club briefly removed them from the line of fire as a precautionary measure).

Ansu had another setback in 2015 when he suffered a broken leg, but his progress would not be hindered and last season he was one of the stars of the Uefa Youth League, scoring twice in the semi-final against Chelsea but seeing his team knocked out on penalties.

His goal-laden performances for the youth team were also rewarded with a solitary call-up for the club’s reserve team, which competes in Spain’s third-tier Segunda B Division. So Ansu’s first taste of professional football, in March this year, came in a distinctly underwhelming manner: an unused substitute in Barca B’s 1-0 victory at Ebro in front of a couple of hundred spectators.

At that stage, Fati was still a million miles away from first-team football at the Nou Camp. But then came a whirlwind summer.

The day after Simons’ departure, Barca responded by handing Fati a new three-year contract with an eye-watering release clause of 100m euros, sending out a clear message to predators: one of La Masia’s crown jewels had been stolen, but Simons would be the only one to slip away.

Even so, Fati was expected to spend this season continuing to play for the youth team – now managed by former goalkeeper Victor Valdes – with occasional bonus outings for Barca B, and he was not included in the senior squad’s pre-season trips to Japan and the United States.

Fati wasn’t even considered for selection in Barca’s season opener against Athletic Bilbao, but when that game resulted in Luis Suarez and Ousmane Dembele suffering injuries, joining skipper Lionel Messi on the sidelines, manager Ernesto Valverde was suddenly left with a serious shortage of numbers in attack and called Fati into the squad for the home opener against Real Betis.

The 16-year-old made it to the bench and, with his team leading 5-1 and the game already won, was introduced as a substitute for the final 10 minutes. Fati instantly looked at home, producing some bright touches on the right wing and earning a warm congratulatory post-match embrace from Messi.

Report
Even better came the following weekend. With Barca trailing 1-0 at half-time against Osasuna, Valverde reacted by calling Fati from the bench during the interval. The decision was vindicated within seven minutes, as Fati rose to meet a right-wing cross from Carles Perez with a pinpoint header into the bottom-left corner, becoming Barca’s youngest goalscorer.

Following the deadline-day departure to Celta Vigo of Rafinha – starter in the previous two games – Fati received another promotion from Valverde for Saturday’s visit of Valencia, being elevated into the starting line-up for the first time.

Back down to the youth ranks?
Before you anticipate seeing Fati starring at the Nou Camp on a weekly basis, however, there is a clear message from within the club: slow down.

The reality is that Fati has only been able to enjoy his meteoric rise to the first team because Messi, Suarez and Dembele have all been out. When they are fit, the youngster will lose his place. In fact, that has already happened: Fati was taken off after an hour on Saturday for Suarez, who promptly marked his return from injury with two brilliantly taken goals.

And in the wake of Fati’s electrifying full debut, there were plenty of words of caution. Valverde emphasised the importance of “our job to protect the player”, while defender Clement Lenglet added: “We have to be calm with him. He needs to listen to people and work hard, because playing for Barca is very difficult.”

Despite the teenager’s stellar start to the campaign, it remains the case that Barca’s first-choice forward line this season will be Messi, Suarez and Antoine Griezmann, and the most Fati can hope to achieve is competing with Dembele for the status of first-choice back-up.

Is there a way back for Barca-target Neymar at PSG?
And that could be a closely fought battle. Valverde has never been truly convinced by Dembele, who is supremely gifted and frustratingly erratic in equal measure, and pundit Michael Robinson came down in Fati’s favour during his television commentary on Saturday’s game against Valencia, observing: “Fati on the pitch already looks more mature than Dembele.”

Fati certainly looks the part. He generally plays on the left wing (he wore the number 11 shirt in Barca’s youth teams), cutting inside to run at defenders or shoot with his stronger right foot. But he is also comfortable using his left foot, demonstrated by his assist for De Jong on Saturday, and at 5ft 10in he has a powerful frame and offers a good aerial threat, as shown by his excellent headed goal at Osasuna.

The fact Fati has already scored a header, a goal with his right foot and an assist with his left foot after just two hours of senior football is a neat indication of his all-round talents, and Barca fans are eager to see a lot more of him.

More immediately, though, Fati could receive the chance to shine on the international stage: the Spanish federation is reported to be rushing through the necessary paperwork to allow him to represent the country in the forthcoming Fifa Under-17 World Cup, which will be staged in Brazil in October and November.

Remember the name. Even now, Ansu Fati is becoming impossible to forget.

Sadiq Umar despirate to push Almeria back to Laliga

Sadiq Umar is despirate to secure the Laliga spot next season they were only seven points behind Espanyol and Mallorca...

Messi will stay at Barcelona, Laporte is convinced

Pique set to play in El Classico, without pain

Usain Bolt picks Ronaldo over Messi, as the best footballer

25
No Result
View All Result